We are looking for memories about Stanton’s music shop in the 1950s so that we can recreate it in our new 1940s-60s historic town.

The building we are recreating was knocked down in the late 1950s and replaced with a modern flagship store. Right now, we are looking for memories of Stanton’s old home prior to 1960.

We are very keen to hear from anyone with memories of the 1950s shop; who bought records, instruments, or electronics from Stanton’s; or anyone connected with the Stanton, Howarth or Nash families.

This building has so many stories to tell, so if you or anyone you know remembers Stanton’s during this period, please get in touch via

James Stanton founded his piano tuning business in Tipton in 1870, and shortly after set up a “pianoforte and harmonium warehouse” on Owen Street. In 1895, he opened a shop at 10 Castle Street, in Dudley. By the 1950s, the shop was in the hands of his daughter-in-law Florence, her daughter Audrey Howarth, and a managing director, Frederick Nash.

In the late 1950s, much of Castle Street was demolished for Dudley’s town centre redevelopment, including replacing the old, Georgian building with a brand new block. It is the older building that will be recreated in the Museum’s new 1940s-60s town centre.

Stanton’s sold a range of musical instruments, including their traditional pianos but also electric organs and electric guitars. They moved on from gramophones to sell radiograms, radios, televisions and record players, as well as records to play on them which could be tested at listening booths first.

Stanton’s enables us to talk about the music and culture of the Black Country in the 1950s, including the rise of rock’n’roll and changing fashions.

We are researching the older building, Stanton’s original shop in Dudley. It gives us the opportunity to display early televisions, record players (like the Dansette, with its changers manufactured by the tens of thousand at BSR in Stourbridge), transistor radios (like those made by Ever Ready in Wolverhampton) and even early reel-to-reel tape recorders. We will be able to demonstrate and invite customers to have a go at playing musical instruments like electric organs and guitars, and listen to records in the listening booth. Through this, we will tell the changing story of Black Country culture: the birth of rock’n’roll, the rise and fall of the teddy boy, and much more.

Do you have a favourite record from the 1950’s? Perhaps it’s linked to a particular story or memory…

The Museum has been calling out for memories of Stanton’s since February 2018 and on National Record Store Day, we took to Dudley High street  with Lindy Hop dancers and Black Country Radio to  enlist the help of local people.   We called upon the audience to select their choice of  1950s songs which should be played in the recreated music shop.

After seeing our call out for memories of Stanton’s Music Shop, an eagle eyed visitor spotted this Stanton & Sons piano in search of a new home.

The owner was contacted and has kindly donated the piano which has been in their family since the 1930s to the Museum’s collection. After a re-tune and little bit of cosmetic restoration, we plan to display the piano in Stanton’s shop as part of our BCLM Forging Ahead development. 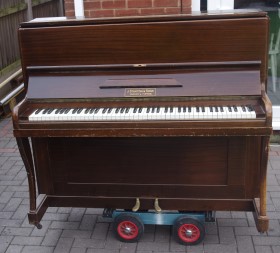 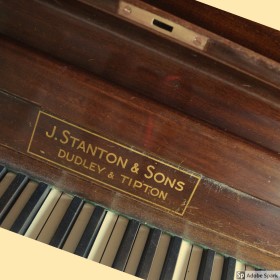 This payment book was an agreement with Stanton’s for the purchase of a Hausmann piano.

It belonged to Mr & Mrs Hobbs who bought the piano for their son in August 1937. An initial deposit of £1 was paid along with a trade in of their old piano to the value of £4. We can see that payments of around 5 shillings were paid weekly until 1938 when this was increased to £1 a month. The purchase was completed almost 4 years later in February 1941 a total of £43.20 with a signature settled with thanks.

At the time, the family ran a guest house on Claughton Road in Dudley and welcomed many lodgers who were visiting or performing at the Dudley Hippodrome. Mr Hobbs had an evening job at the Hippodrome operating the curtains.

Unfortunately, it is not known where the piano now resides but it was lovely to hear the story and see the payment book from Stanton’s.