Forging Ahead: The Elephant & Castle

The Elephant & Castle Pub once stood on the corner of Stafford Street & Cannock Road, Wolverhampton. The Museum plans to recreate this once-treasured watering hole in a 1940s-60s town centre as part of its ambitious new development project ‘Forging Ahead’.

We are looking for memories and objects relating to the Elephant & Castle in Wolverhampton, 1950s-60s.

The Forging Ahead project team is currently inviting individuals to submit tender proposals for the design and production of historic advertising and packaging for the Elephant and Castle pub. If you are interested in applying, please download our information pack below for more details. 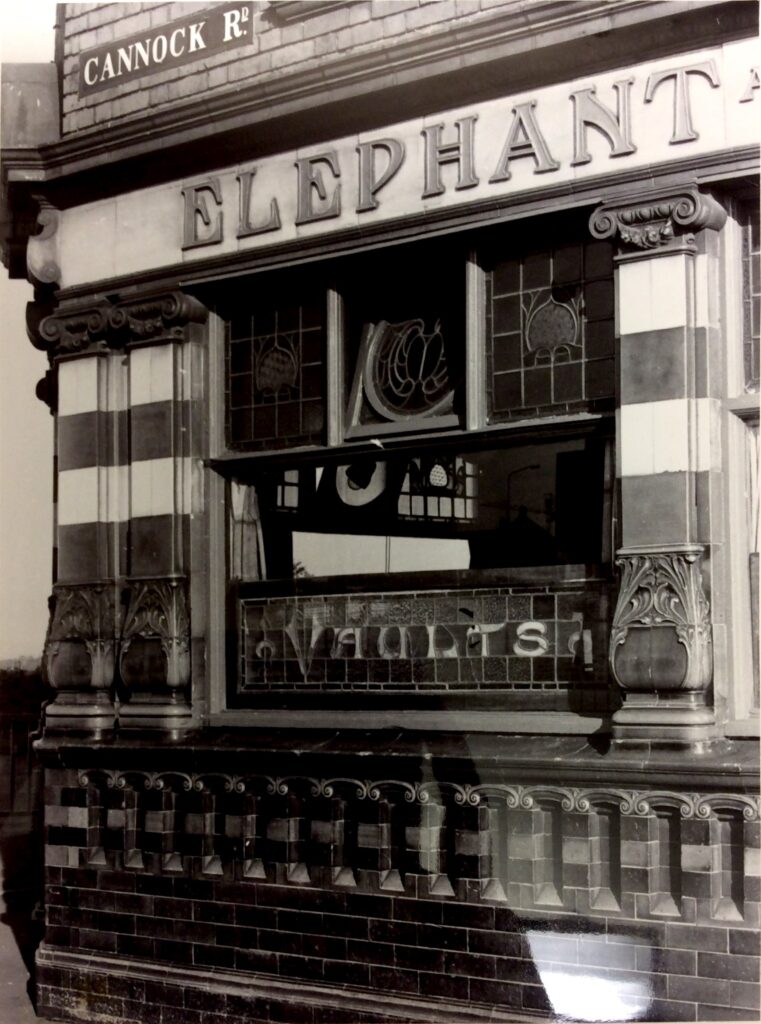 Do you have any personal stories about the pub which stood on the corner of Stafford Street & Cannock Road, Wolverhampton? We would especially like to hear stories and memories from the 1950s. Did you or your family and friends drink there? Play dominoes there? Did you ever hear any stories about the pub? Or just use it as a meeting place?

We are especially interested in collecting the following items:

If you do have anything you would like to donate or share to help in our recreation of the Elephant & Castle – one of the biggest recreations within BCLM: Forging Ahead – please get in touch with our Collections Team:

About The Elephant & Castle

The Elephant & Castle was the grand Edwardian pub that stood on the corner of Stafford Street and Cannock Road. There had been a pub on that corner since at least 1834, when Samuel Davis, maltster and retail brewer, was licensee. Situated on a main route into town, it must have been a popular coaching inn, and by 1905 its owners, Manchester Brewery Co. (at this point under the chairmanship of John Henry Davies, who also owned the newly-christened Manchester United Football Club), decided to demolish and rebuild it as a magnificent landmark for those coming into Wolverhampton. The pub was designed by J.F. Hickman and H.E. Farmer from Walsall – best known for their cinema and theatre designs – and constructed by Speake & Sons of Stafford Street, Wolverhampton. Its instantly-recognisable green and white frontage – a specialist form of ceramic brickwork known as faience – was constructed by the famous Gibbs and Canning of Tamworth, who built similar terracotta for the Natural History Museum and Royal Albert Hall in London, and well-known Black Country buildings like Horseley Heath Post Office, and the Midland Counties Dairy in Wolverhampton.

In 1907, Manchester Brewery was taken over by North Worcestershire Breweries, who were in turn acquired by Wolverhampton & Dudley Breweries in 1910, making the Elephant & Castle part of the Banks’s estate. By this time, Wolverhampton & Dudley were rapidly becoming one of the largest breweries in the region, competing with Mitchell’s & Butler’s huge Cape Hill brewery in Smethwick, and William Butler’s Springfield Brewery in Wolverhampton, as well as the multitude of small breweries and home-brew pubs in the Black Country. They went on to acquire other breweries, such as John Rolinson and Sons of Netherton, and the famous Julia Hanson’s of Dudley.

Little is currently known about The Elephant & Castle’s licensees in the post-war period. We believe that a Sydney Jones was in charge in the 1940s, and Doris May Davies in the 1960s.

The Elephant & Castle was typical of Edwardian pubs, with a public bar for the working class, and a separate Smoking Room, with slightly higher prices, for the middle classes – that way, managers could drink in the same pub without having to mix with their employees! The pub’s clientele was diverse, however. Wolverhampton was home to many thousands of Irish immigrants during the nineteenth century, many living in the Stafford Street area, and this was reflected by the Elephant & Castle’s Derry-born publican Patrick O’Kane in 1891. After World War Two, as local firms struggled to find the labour they needed, the Irish again formed the largest group of incomers, but they weren’t the only ones: colonial and Commonwealth citizens from India, Pakistan and the Caribbean also heeded the call for workers, and drinkers from all of these nations could be found in the Elephant & Castle. The pub’s sad decline in later years was capped by its unexpected demolition in 2001 – shortly before it could be considered for listing.

Why The Elephant & Castle?

It allows us to tell a multitude of stories of Black Country life from the 1940s-60s, including class divisions in pubs, pub games, drinks and stories of migration.

Upon completion in 2022, visitors will be able to experience life in the post-war by trying a pint in the public bar, retiring to the Smoking Room with a bag of scratchings, or by taking on the regulars at dominoes.

In our search for memories of The Elephant & Castle Pub (Wolverhampton), previous tenant Mo contacted BCLM about a homemade model of her home in the 1990s.

Mo has kindly donated the impressive model to the Museum, along with many memories of the pub, which will prove a useful resource when recreating the well-known landmark.