The Co-operative sweets and treats you’re bound to remember…

As work continues at Black Country Living Museum to recreate a Halesowen and Hasbury Co-operative Society shop, we delve into a shopping basket to look at some of the popular Co-op products. Our Researcher Clare has delved into the history of the Co-op and the sweets and treats we all remember and love, read on for more…

The Halesowen & Hasbury Co-operative Society had its own bakery building, supplying its shops with freshly baked bread and cakes.

The first bakery, set-up between the Peckingham Street store and Birmingham Street in Halesowen town, was replaced with a new ‘Model Bakery’ in 1929. The Model Dairy was built in front of the bakery (now the site of the McDonalds on the ring road).

One of the most popular products, certainly amongst staff, were the pineapple tarts. Robert, who worked at the Hasbury branch in the 1950s, remembers the fresh cakes being delivered daily.

“It was a race because I loved the pineapple tarts, they were beautiful. Pineapple inside, fresh cream and a bit of icing on the top, they were to die for.” His sister Ann, who worked at Spies Lane and Stourbridge Road, agreed that they were delicious “I think they were everyone’s favourites”. The pineapple tarts were also very popular with Clive and Wendy from the Stourbridge Road branch. Their memories of these popular tarts came back to them when they met with the Museum to talk about their time working for the Co-op.

Other products made in-house included lardy cakes, door-stop style bread pudding and cream slices. Ann and Margaret, both shop assistants for the Co-op at Spies Lane and Colley Gate in the late 1950s, had their two tier wedding cakes made by the bakery. Ann recalls that her cake cost £5.

The Halesowen & Hasbury Co-operative Society could purchase goods from a number of Co-operative factories around the UK, all branded ‘Co-operative Wholesale Society’ or ‘CWS’ for short. The CWS produced a number of teas, including No.2 ‘Society Tea’, No.6 ‘Economic Blend’, No.11 ‘Pure Ceylon tea’ and No. 40 ‘Co-operative Tea of the Best Gardens’. The brand that survives today is No.99, referring to the number on the tea blender’s chart.

It was originally known as ‘Prescription Tea’, with the claim to aid digestion due to its low tannin. When such medicinal advertising claims became inappropriate in the 1930s, the tea was renamed ’99 tea’.

Pat, working at the Colley Gate branch, remembers selling “boxes and boxes” of 99 tea, it was so popular.

A big part of the local Co-op business was taking orders. Young staff were often sent out on foot or on bike to collect orders at the start of the week. They would then work in the back room of the shop, gathering the stock into boxes to complete the orders, lined up in the order of the roads they were to be delivered to.

Large orders were delivered by vehicles but some orders went out by bicycle. John and Clive’s first job in 1955 was on the Co-op bike, collecting and delivering orders. Clive started out from home on a Monday in Colley Gate, down towards Belle Vue up Hayseech Farm, onto the new estate, along Whittingham Road, Stourbridge Road and then up Alexander Road, to cover all the streets on the Yew Tree Estate. 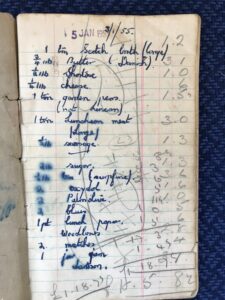 Clive recalled collecting over 100 orders and he would be collecting the money for the previous week too. If it rained, he wore the sou’wester the Co-op provided. A yellow hat and cape that covered him head to foot, with two hoops in the cape for your thumbs so you could grip the handlebars.

Ann from Spies Lane also collected orders on a Monday in the Lapal area on foot, taking a list of products the manager would ask her to try and sell, asking “Are you ok for a tin of peaches this week?”

The Museum has the order book for a regular customer in 1955 and we can see their weekly purchases. These include tins of garden peas, ‘Superfine’ tea, ‘Kako’ cake flour and ‘Shortex’, all from the CWS range. Shortex was the CWS own brand of shortening, a type of fat that is solid at room temperature, ideal for making crumbly, crisp pastry. As the Co-op claimed, “the short cut to good cooking”.

The Museum plans to recreate these products to display in the shop, alongside many more Co-op brands from the year 1949, when the Co-op began to embrace a new style of self-service shopping.

With special thanks to Dudley Archives and Local History Service for additional resources.

Back to News index
We use cookies on our website to give you the most relevant experience by remembering your preferences and repeat visits. By clicking “Accept All”, you consent to the use of ALL the cookies. However, you may visit "Cookie Settings" to provide a controlled consent.
Cookie SettingsAccept All
Manage consent